I am sharing with you a tribute to the unbought and the unsold son of the African soil and iconic legend of the arts and culture Nana Kefuoe Walter Chakela of NWASA (National Writers Association of South Africa).

Many in our midst were culturally inspired and birthed by the dexterous; creative and steady hand of the iconic Nana Chakela. His flawless execution in the theater stage or in the literary cultural expressions was characterised by the indicia of African philosophical transcendence as if he was possessed by the artistic spirits of the African ancients.

The highly celebrated icon in the arts and culture domain Nana Kefuoe Walter Chakela was laid to rest in a small but dignified service at Mafikeng in the North West province of Azania (South Africa) on Saturday May 30, 2020. The following tribute from NWASA (National Writers Association of South Africa), the organisation of which Chakela was a founding President, follows (the full text of the tribute in PDF document is downloadanle at the end of this article, thanks to Dr. Lance Nawa of NWASA). 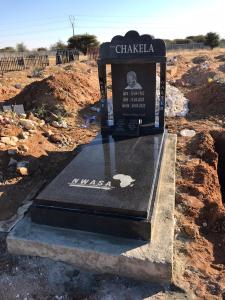 Nana Walter Kefuoe Chakela was a father to an entire generation of artists under his tutelage across all social contours in South Africa, a peer to a congregation of wordsmiths for whom there are no enough words to decorate with, theatre guru, thought-leader, lateral thinker, visionary, magnetic and unifying leader who listened to all voices, and an arts administrator. The cross-over artist understood the value chain of the production of art works the same way an African kraal that keeps livestock provides livelihood to a network of creatures. He embraced, gave opportunity and counsel to any practitioner on the play-making conveyor belt. Actors, musicians, stage managers, composers, producers, costume designers, beauticians, graphic artists, cast drivers, tea-makers, all found shelter, shade, security comfort under this baobab tree. Not all beneficiaries of his generosity, tutelage and camaraderie in his theatre kraal can be accounted in his current known footprints. They shall probably feature in many future publications in which academics, researchers and journalists will write, and write, and write, and write about him to eternity. For now, the least all those whose paths have crossed his can do is to join Bapedi in saying: mokgapa o mogolo o wele, dithaga re lla bošogošogo. Bagolo ba ile. Bare mahlaku a maswa a thekgwa ke a matala; bjale rena re tla thekgwa ke mang?

National, continental and international icon in the cultural industry, Nana Chakela’s roots are anchored in the North West Province. He was born on 13 April 1953 to Chateau and Harriet Chakela. He started formal education at Mokgosi Primary School, and advanced to Huhudi High School in Ganyesa where his talent and love for the arts germinated. His first ever plays where staged during his high school days when even some of his relatives Ditshwanelo Chakela and Ntswaki Matobo were part of his theatre crew that toured South Africa, Botswana and Namibia. The younger brother, Moses, also acted in three of his plays.

The following is a literary rendition that venerates Nana Chakela:

a flawless Black performance,
to enhance the resonance.
Stage craft of Chakela was bold
To pave for artists like scaffold
His daring arts unimpeded
With African truth embedded
To vibrate as he was intended to vibrate

to traverse the syntactic,
with presence like majestic.
African calendar lecture
At State Theatre like moonflower
To mark teachings of the ancients
Chakela awarded lechoba to me
To preserve teachings for posterity

For many botanical systems, the stem is the only source of strength in terms of sustenance; stability and direction. However, the mainflower is a contrarian strategist. He is a vine that navigates; twines; networks and climbs formidable barriers to rejuvenate and to enhance his survival experience and those around him. As a corollary, he is hardy and drought resistant because he is not defined by adversity but is inspired by it.

Nana Chakela of NWASA on a wheelchair at the Pretoria State Theater wherein this writer delivered a lecture The African Calendar. Photographer: Dr. Terrence April of uMsamo African Origin of Philosophy.

The moonflower germinates fast because the window of opportunity is extremely slender. The moonflower blooms at night in the absence of the sunshine. The great legend Nana Kefuoe Chakela was a legendary African moonflower who bloomed even when the sunshine of opportunity was not there. Like a moonflower, he boasted superior network skills; he scaled every barrier; he executed every opportunity and he selflessly inspired new artists coming after him. Robala ka kgotso mohlomphehi e motle! Retla le hlokomela Lechoba lena! Tsamaroko! Ezamathongo! Thokoza Makhosi!

2 thoughts on “To Venerate Nana Chakela”