agoraphobia, unable to dismiss,
the threat that is amiss.
Hitherto, melanophobia
Hereafter, leukomania
The Blackness, low-key
The Whiteness, high-key
The Blackness like arrested

the free space, not diligent,
to exchange the exigent.
Embraced Blackness, like delayed
Unshackled Blackness, betrayed
Neural crest melanin, like gated
By a recessive gene, that hated
To displace the melanin 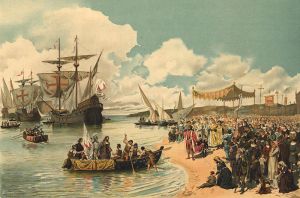 Vasco da Gama of Portugal praying to a White god on the beach of Lisbon on July 8, 1497 asking for supernatural powers to defeat the indigenous peoples of foreign lands. He landed in Azania (South Africa) on Christmas November 25, 1497 and gave the name Natal to then Zululand. Art Credit: Alfredo Roque Gameiro of Portugal.

The formidable desert flower Mponeng rises under prohibitive conditions to embrace the rain that falls. Mponeng does not peel her eyes from the heavens that bring the rain. She preserves and hides an indefatigable spirit like a dye in the wool so that her willpower is not erased by the repressive conditions that stifle an enterprising spirit.

The nefariously brutalised, sodomised and broken soul of the melanin is not afforded a fair hearing and empathetic understanding for the glaring scars that exist and persist. As a consequence, rightful reparations are not forthcomng owing to a longstanding veto. As if that is not nefarious enough, Yena is a potential target for a novel method of reverse sequencing (reverse genetics) of RNAi (RNA Interference) for which a Nobel Prize and billions of American dollars in research funding were paid. Some of those monies were probably paid out as a bounty for political influence on the blanket use of RNAi.

RNAi is a new method of silencing gene expression so that a protein synthesis by mRNA (messenger RNA) is aborted. This violates a very important process of the Central Dogma of Molecular Biology in which case the RNA is deleted from the process. Cells require mRNA to create proteins. Proteins can be enzymes; molecules; hormones; egg; sperm or babies, among others.

RNAi is very specific to a particular gene type meaning we can target the destruction of a particular protein in a particular phenotype by either triggering endogenously (from inside the cell) or exogenously (from the laboratory) the mother type III enzyme Dicer (and other enzymes) to chop the dsRNA (double stranded RNA) to produce shRNA (small hairpin RNA) and miRNA (micro RNA) and along with RISC (RNA-induced silencing complex) to bind to mRNA to degrade it so that it is no longer possible to create protein.

There are numerous implications for this in the hands of the well funded unethical companies and hired guns like reduced birth rates of Black boys; reduced IQs as a result of weak synapses due to protein loss and more. Synapses require genetic input to strengthen their synaptic connections. Glial cells require protein to repair damaged axons of neurons and to provide strategic support for the neurons.

I shall have more to say about this RNAi phenomenon.

On the positive side, RNAi can be a powerful therapeutic tool in tackling diseases like cancer and other tumours although I still think the benefit of RNAi as a therapeutic tool might be limited to etiology; diagnostics and modelling because the cell still needs its own natural way of healing otherwise the cell becomes drug-dependent.

As a consequence, unfavourable material conditions have been and continue to be created to make it harder to exit the arresting chains of the White establishment. Thus, a freedom delay is a freedom reversal. Another cruel segment of the timeline is added to the delay.

Like the desert flower that rises in the face of stringent adversity, the badass melanin must buttress his recuperating skills to heal from the imposed wounds in order to retake his inalienable position as the unbought and the unsold architect of destiny. He does not need permission from the draconian masters to win his freedom. If he tries to negotiate his freedom, the draconians will breath fire over him to incinerate his plans of no-strings-attached emancipation. Moreover, he is not and must not think like or act like a vassal. If he acts like a vassal he will be treated like a vassal but if he acts like a badass free man, he will be treated like a badass free man. Thus, the melanin must get on with the program of a badass free being. 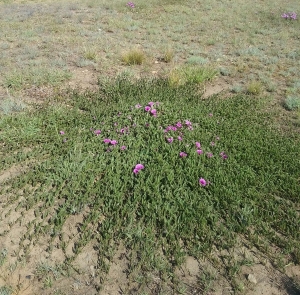 The Mothokgo plant is the protector of the melanin. Picture Credit: Z Zulu in the Free State province of Azania.

He must chart Thite (an independent novel path) to bust the alloyed bonds to break free unmindful of the stringent retribution that may be visited upon him and the clan. The moral code of unstinted shattering of the chains is existential! There are no alternatives!

Like the desert plant that accepts with aplomb the transience of the falling rain knowing that the rain will soon be gone, the mighty melanin must defer self-gratification for a futuristic, permanet and unconditional emancipation. The loyalist and gutsy melanin must rise to the ocassion knowing that the ephemera of opportunity will soon vanish into oblivion and never to return.

Despite visibly scarred on account of a treacherous and ferocious fire of the White establishment supplemented with compliments of backstabbings from other melanins, the melanated architect must emerge from the ashes like the Kemetic phoenix to be schooled in the philosophical transcendence of the desert flower that remains undefined in spite of the unrelenting fury of the desert conditions.

To rise from the ashes is like a computationally hard problem. It has been more than five hundred years and still counting since the melanin was shackled and dispossessed in the land of Azania and the Diaspora. The melanin has been unable to recover from the resulting setback for more than half a century. There is a legitimate reason for this legendary failure on account of privated conditions. Nonetheless, it does not have to be this way. We can change this by disallowing the legitimacy of the reasons to perpetuate the indignity of arrested development. There are no cheat sheets and the pathway to a permanent liberation is a painful one. The the pain can only be avoided at our own peril.

This hard problem can be and must be cracked without the input of colonial parameters. Any deviation from this modus operandi is a reset to the original problem.

One thought on “Hitherto, Melanophobia”