The erudite scholar who traces his birthplace to the Francophone country of Martinique and his revolutionary mission at an African country of Algeria, the legend Dr. Frantz Fanon is the source of the vibration of the ancestors as we write these sacred pages that are energised by the erudite ancestors who have gone before us. We give thanks to the great son of the African soil of Niger Dr. Farmo Moumouni for introducing us to Frantz Fanon in the great land of Canada. Thokoza Makhosi!

Fanon was forever connected in a direct way to the metaphysical case of the African descendents with respect to their Africology, thanks to the great son of the African Diaspora Professor Winston Van Horne who conceptualised and created the knowledge discipline of Africology.

To Venerate Africology, Lest We Forget!

As I digress, to venerate the Africologist, the Van Horne spirit resonates strongly with my stubborn African spirit in the internals of my being. The stubborn spirit is good when it is right! Thokoza Makhosi! As a matter of fact, my home in the Canadian City of Toronto in North York was located on the Van Horne street not knowing at the time that this was the harbinger of the coming furious vibration of the erudite ancestors and my futuristic calling as a doctoral practitioner of African medicine and cosmology. 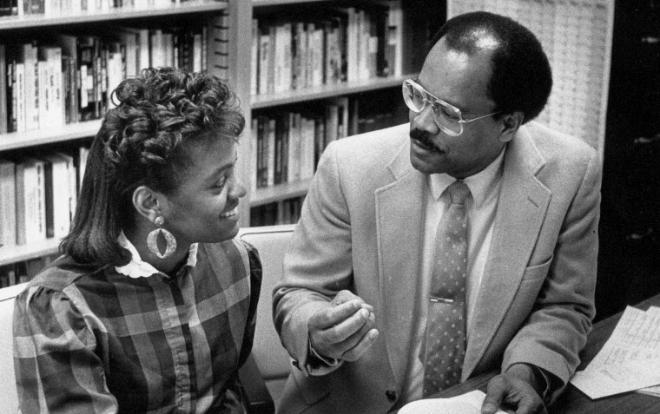 The founder of Africology Dr. Winston Van Horne at the University of Wisconsin.

As destiny would have it, the gods of the cosmos conspired in favour of my abode at Van Horne in order for this name to be forever edged in my memory. Even the TTC (Toronto Transit Commission) system had the name of Van Horne in their register. Thokoza Makhosi!

Dr. Molefi Asante had independently created Afrology as a part of his new theory of Afrocentricity but the selfless Dr. Asante later bowed down and deferred to Dr. Van Horne as the creator of Africology so that Van Horne could preserve and relish his uncontested position of the ancestors as the inventor of Africology.

“The Africological Movement, emerging in the mid-l980s, was trans-generational and transcontinental in scope. In my book, Afrocentricity written initially in l980 and revised several times since, I had spoken of a discipline of “afrology.” This term was refined to “africology” by the University of Wisconsin professor, Winston Van Horne. I have since employed this term, using the definition I once gave afrology, that is, “the Afrocentric study of African phenomena”.

We venerate this honourable ancestral spirit and the moral code of clannish cooperation among the African descendents so that we can defeat the White establishment that is consistently working hard to deepen; to concretise and to perpetuate our shackles in the economic state of arrested development.

As a matter of fact, this selfless act by Dr. Asante was potent enough like the highly concentrated saliva of Masumu of Matamong to elevate my fearsome respect for the living legend to a new paradigmatic dimension. We need more of this Asante spirit of selflessness to enhance our survival experience in the terrestrial space. Thokoza Makhosi!

Dr. Van Horne departed on May 24, 2013 from the perturbations of the terrestrial space to cross over into the tranquil space of the cosmos for a historic reunion with the erudite ancestors who have gone before. May the blessed soul of Van Horne rest in peace as he continues to inspire us as one of the ancestral spirits of the cosmos. Thokoza Makhosi!

Now we return to the focus of this contextual commentary. Thokoza Makhosi! Frantz Fanon wrote a doctoral dissertation tittled The Desalination of the Black Man for his Doctor of Medicine university degree at the Université de Lyon, Faculté mixte de médecine et de pharmacie, in Lyon, France (University of Lyon, Mixed Faculty of Medicine and Pharmacy). This dissertation was rejected in toto by his French Professor of Medicine Dr. Dachaume on the basis that the university would not qualify a medical thesis that was too political and radical.

The ground-breaking thesis of the dissertation posed an impressive threat to the French establishment of academia. The dissertation advanced a novel thesis that the etiology of African suffering was due to losing the salt of Yena’s authentic self as a result of making futile attempts to reconcile with antagonistic contradictions which were not reconcilable. The Nobel Prize winning Existentialist Philosopher Jean-Paul Sartre and a good collaborator with Frantz Fanon echoed these sentiments when he wrote in the preface of one of Fanon’s books The Wretched of the Earth as follows:

“A new generation came on the scene, which changed the issue. With unbelievable patience, its writers and poets tried to explain to us that our values and the true facts of their lives did not hang together, and that they could neither reject them completely nor yet assimilate them. By and large, what they were saying was this: ‘You are making us into monstrosities; your humanism claims we are at one with the rest of humanity but your racist methods set us apart'”.

Fanon further elaborates on his mission as follows:

“I believe that the fact of the juxtaposition of the White and Black races has created a massive psychoexistential complex. I hope by analyzing it to destroy it”.

The rejected doctoral dissertation of Fanon was subsequently reincarnated as his first book Black Skin White Masks, the greatest scientific text on the metaphysical principles with respect to the causality of racist behaviour.

This transcendental metamorphosis from rejection to a book launch is a powerful demonstration of an unconquerable spirit that does not allow its human sacrosanct destiny to be defined by the perturbations of the terrestrial space.

I must not allow the perturbations and the attractive powers of the terrestrial space to break my vibration. I must vibrate the way I am supposed to vibrate. I must stand my sacred ground to stubbornly and ferociously defend my sacrosanct vibration like the great clan of Phiri Ya Manka (the hyena clan led by a female commander) who stand their ground with tenacity against the killing machine of the mighty lions, directed; inspired and instructed by the moral code of the unconquerable spirit in the African Savannah. Thokoza Makhosi!

Essentially, the thesis of the book Black Skin White Masks postulates that sex is the internal combustion engine that drives a racist behaviour, a metaphysical case that is attested for by South Africa’s Immorality Act of 1927 which prohibits a sexual contact between the European and the African native. It is the substantia niagra; the dopamine system and the functional groups of the melanin system that pose an impressive threat to the White establishment making an African a biological; intellectual and economic threat.

The sexual Immorality Act was ratified in March 26, 1927 by the architect of the White establishment King George V of England. This demonstrates an uncontested fact that it was the English (not the Dutch descendents as commonly believed) who architected and enacted the infrastructural components of what would latter become the Apartheid system.

Some of those infrastructural components of the White establishment include the internal passport control system known as the Pass which was based on the Glen Grey Act of 1894, long before the advent of the Apartheid system.

It is noteworthy to point out that the sexual Immorality Act along with its subsequent ammendments was so nuanced that it also referred to an enumerated list of behaviour patterns in the sense that if you were non-African man but displayed African mannerisms and had sex with a European woman, you were automatically found guilty of transgression and punished accordingly as though you were an African native to begin with. This is like the English Canadian who finds that you speak impeccable French and you behave flawlessly like a Francophone and Yena begins to ostracise you as if you were a French native. Kanjani? How can that be? What kind of morality would justify a stringent punishment against another human being on the basis of vicarious existence?

Fanon was concerned about the African who went to great lengths to make Yena compatible with the White francophone establishment in the attempt to alleviate the traumatisation of being non-grata; non-existent and non-recognised as a sentient being which triggers another book Invisible Man by Ralph Ellison who devotes the entire book to the phenomenon of being non-existent in spite of the reality of being there. I experienced this phenomenon in the Anglo-Saxon society of Ottawa and my literary pieces The Cold Maple Leaf; The Gentle Exclusion; To Convince You and others document this fact in the book A Woman in the Bush.

Fanon conceptualises about the africology of this African phenomenon as an epidemiology of oppression and uses the Psychological Existential Theoretical Framework to subject this phenomenon to the rigours of psycho-analysis and dialectical materialism.

In his data gathering and analysis, Fanon draws from his personal experience in The Fact of Blackness, a chapter in the book as follows:

“All this whiteness that burns me. I sit down at the fire and became aware of my uniform. I had not seen it. It is indeed ugly. I stop there, for who can tell me what beauty is?”

The writer of the 2008 edition Foreword; a Pakistani scholar and a Muslim polymath in England Ziauddin Sardar, reacts as follows:

“This directness, this simmering anger, makes us uncomfortable because ‘civilized society’ does not like uncomfortable truths and naked honesty. But this is exactly what makes Black Skin, White Masks such a powerful and lasting indictment of western civilization”.

You need to buy my book The Sacred Knowledge of the Desert: African Philosophical Transcendence in which the concept of transcendence is defined as “undefined”. Siyabonga ka khulu! Thokoza Makhosi!

9 thoughts on “The Sanitized Self”