In Canada, there is an expression “Speak White” which means “Speak English”. This expression was used a lot to refer to every person of non-English descent particularly the French speaking Canadians and European immigrants. The idea of imposing language and values of a foreign culture upon others is described herein as cultural hegemony under Category 3 of Cultural Colonialism. The phrase of cultural hegemony was first described by the Italian philosopher Antonio Gramsci who was introduced to me while I was a member of the Italian Writers Association of Toronto in Canada. I had moved to Toronto from Ottawa in 2007 to reverse engineer a graphics engine for a Russian company.

Cultural hegemony appears in my recent scholarly paper African Metaphysical Science and Decolonisation under Category 3 in which I describe cultural colonialism. To counter and to reverse the arresting powers of subliminal infiltration of cultural hegemony, I introduce a new idea of Nkukumuwism. In this scholarly article, I provide a metascientific narration of the concept of Nkukumuwism to foreground the mission-critical importance for the African descendants and other indigenous peoples of the world to retake their sacrosanct role as architects of their own inalienable destiny.

Notwithstanding, this article is more concerned with Category 3 colonialism which is about cultural colonialism. The reader should read the African Metaphysical Science and Decolonisation to learn more about the taxonomy of colonialism.

Ontological colonialism is about the imposition of the foreign description of reality. The strategic goal is to displace the indigenous cosmology that describes and defines what is real. The Basotho cosmology describes reality in a triangulated form as (1) symbolic existence; (2) perceptual existence and (3) literal existence. The Sesotho axiom “Nkare teng” describes this metaphysics of reality succinctly. When translated into English it becomes “From the vantage point of the observer, it is like the case, the case that it is the case”. The Basotho cosmologists give us the brevity as the wit of soul. This distilled form of propositional logic is so powerful that even the English linguists cannot match that. The metaphysical case of literal existence describes existence as Mokedi which is a fluid form of matter, thus conceptualising about material as having wave properties. The reader is referred to my book The Sacred Knowledge of the Desert: African Philosophical Transcendence for further elucidation. The article Link Between Black Friday and African Slavery also describes the metaphysical cases outlined above.

In a Western society, existence is described as a material or physical state. This means that reality consists only of molecular structure or mechanical properties. The field of materials science describes this form of ontological existence further. In my unpublished book African Rules of the Jungle I go into details about the role of African metaphysical cases of symbolic existence; perceptual existence and literal existence with respect to the survivability of the organism in an unpredictable terrain. For this reason, ontological colonialism degrades the survivability of the organism in the terrestrial space and should not be relied upon as a survival strategy.

In Western philosophical tradition, axiology appears under ethics and is concerned with the legitimacy of actions. A Western society is organised around the ontological primacy of the individual over the collective giving the individual deterministic and veto powers with respect to the ethics of society.

Axiological colonialism is about the foreign imposition and description of ethics; values; aesthetics and beauty.

This contrasts sharply with the African society that is built upon the philosophy of Ubuntu/Botho meaning the collective commands the deterministic and veto powers over the individual with respect to morality.

Axiological colonialism seeks to degrade the African axiology so that it gets corrupted by the Western individualistic tendencies.

The Strategy of the ECC

The strategy of the ECC is to displace the local population in the theatre of knowledge production except for a special case whereby a local producer of knowledge is allowed if Yena regurgitates foreign methods of knowledge.

In the metaphysical cases of ontological colonialism and axiological colonialism, the White establishment respectively defines the reality and the morality for us within the confines of cultural hegemony. Cultural hegemony is about the intermixing of local and foreign systems of knowledge so that the contrast of real knowledge is lost and thus the subjugated is forced to traverse unmarked boundaries of knowledge in the foreground of Eurocentric knowledge using the holy grail of the scientific method as the gold standard of true knowledge. In this way, the local population must give up their epistemic role as producers of legitimate knowledge. In this tragic case of epistemic colonialism, the local population is only allowed to regurgitate foreign knowledge that is not germane to the dialectics of their unique local problem domain.

The credentials of international standards get overplayed in the foreground so that the local population is forever fascinated; enchanted and spellbound by the White beauty of foreign systems and knowledges to the exclusion and the demise of rich local systems of cultural knowledge.

Cultural hegemony is a subset of the superset of Neocolonialism which straddles the two categories of Category 2 and Category 3 namely Economic Colonialism and Cultural Colonialism, respectively. The methods of Neocolonialism (Nkrumah, 1965) are “subtle and varied”. This colonial type of indirection traverses a myriad of disparate fields like the economic; the political; the religious; the ideological and the cultural spheres. It is the cultural sphere that this segment of this article is concerned about.

Cultural hegemony is a powerful tool that enables the White establishment to describe for us what is real and what is ethical as in the case with respect to the rights and wrongs of actions; the valuable and the beautiful using a set of Eurocentric flavoured lenses. Venerated institutions like Universities; Schools; Churches; the Workplace and the Shopping Centres play a pivotal role in the process of cultural hegemony. Thus, reality is described and defined for us or in some cases forced down our throat. By allowing that to happen, we are giving up our fearsome power to architect our own sacrosanct destiny with respect to African ways of knowing and what is real. In this case, Eurocentricity teaches our naive children the kind of knowledge that is founded upon foreign value systems as opposed to a knowledge that is founded upon African value systems.

Some Metaphysical Cases of Reality

Some of the metaphysical cases of reality include the concepts of truth; validity; reliability; authenticity and evidence.

The concept of truth; validity; reliability; authenticity or evidence is about the legitimacy of our own ways of knowing as defined by us and the erudite ancestors who have gone before us. We must ensure that we are in the driving seat with respect to describing and defining our own reality and disallow anyone who seeks to describe reality on our behalf. This is like a man who is writing a book about a woman’s pregnancy. What is he writing about? What does he know about labour pains; the contractions and the travails of birthing a baby? He does not have the lived experience to describe her reality. She is the only one who must describe to us the reality of giving birth. In the same way, we must describe our own reality.

If we fail to do this, then the colonial tentacles of the White establishment shall define the reality and the standards of evidence for us through the invocation of the ontologies of the occident as part of research methodologies.

Research, as a knowledge production exercise, is an important tool in the hands of the White establishment. In her book Decolonising Methodologies: Research and Indigenous Peoples, Linda Tuhiwai Smith of the Maori people of New Zealand describes research as an important part of the colonisation process because it is concerned with defining legitimate knowledge.

Using the Western methodologies of research, African indigenous knowledge does not count as legitimate knowledge. It is the Eurocentric form of knowledge, packaged as the scientific method, that counts as legitimate knowledge. It is for this reason that Nkukumuism exists to define for ourselves the validity of our own knowledge without that sacrosanct role being hijacked and determined for us by the White establishment.

The African engineering technologists who engineered the pyramidal systems of architecture or first analysed the pyramidal cells in human and animal anatomy commanded superior skills in producing reference knowledge with respect to the African metaphysical science. These engineering technologists were able to describe the problem; to produce the domain knowledge of the requirements and to ensure that the problem description was germane to the dialectics in accordance with their African metaphysical science. In this way, they were architects of their own destiny who made their own determination in the description of reality; reliability; validity and metascientific evidence with respect to the newly produced knowledge.

To ensure that the survivability of the naive organism is enhanced in the face of unpredictable perturbations in the terrestrial space, the principles of metascientific strategy; Nkukumuwism and the erudite pages are hereby discussed.

The metascientific strategist Phiri Ya Manka (the African hyena queen) of the African grasslands is able to defeat bigger adversaries like the mighty lions along with their fearsome killing machine and to restore the dignity of the hyena clan by leveraging the moral code and the collective intellectual resources of the clan. 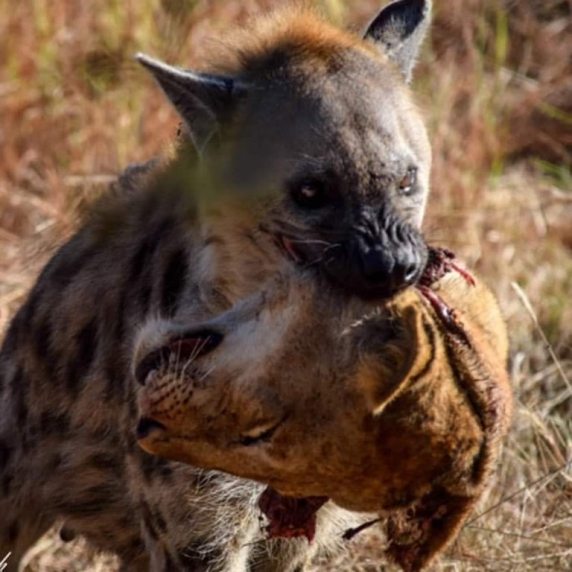 Hyena with lion’s head in her mouth. Picture credit: Scarytownterminator of Nature Is Metal.

Phiri Ya Manka uses the asymmetrical; the transcendental and the tactical methods of the regiment commanders on the ground to conceive of a winning strategy the best way she knows how and that is the hyena way.

Taking an erudite page from Phiri Ya Manka, Nkukumuwism is a cultural; spiritual and enterprising movement intended to restore the sacrosanct role of the African natives as the architects of their own sacrosanct destiny using the  principles of africography.

The main aim of Nkukumuwism is to emancipate the African descendants of the Motherland Africa and the Diaspora from the asphyxiating clutches of foreign control; influences and manipulation and to build a permanent emancipation upon the three pillars of academia; community and family.

Nkukumuwism is inspired and directed by a plethora of erudite pages from the moral code; the cosmology and the metascience of the erudite ancestors who have gone before us and whose sacrosanct vision of restoring the dignity of the African descendents shall be fulfilled in our lifetime and we shall do whatever it takes to make it happen.

The modus operandi of the principles of this sacrosanct philosophy of Nkukumuwism is attested for in the books written by this author as confirmed in the following citations:

(Zulu, 2014) in The Sacred Knowledge of the Desert: African Philosophical Transcendence:

(Zulu, 2009) in African Philosophy of Coexistentialism:

(Zulu, 2014) in Sesotho Dictionary of Mathematics:

Cultural hegemony poses the most impressive threat to the survival experience of the African natives. It has the power to render extinct their cultural way of life. This means the rich cultural heritage such as their cosmology and their languages is on the ropes in terms of the rate of change. The principles of Nkukumuwism give us a chance to stem the tide of cultural demise. Are you going to challenge yourself to seek the ways of the culture so that you can take what is good out of it? Raboka dikgomo le manamane! Sabonga izinkomo namankonyana! We venerate the invocation of the sacred cows of the ancestors!

15 thoughts on “Cultural Hegemony and Nkukumuism”