On December 17, 2016 I delivered a speech at Bakholokoe event at Drakenstein farm (Thaba Bakholokoe II) near Bethlehem in the Free State province, South Africa. The Bakholokoe people (also known as Makholokoe) converged on this farm for purposes of celebrating their heritage, narrating their history and paying tribute to the erudite ancestors who have gone before them. The farm owner Nchakha Moloi provided the massive platform for the Makholokoe to do their thing unimpeded by nothing before them. The event was a historic occasion boasting legendary female performance groups like Tshwaranang Diodi as shown in the photo below. 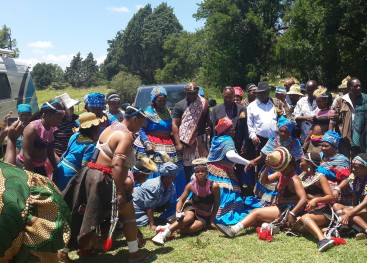 The Program Director of this historic event (also known as Master of Ceremonies) was the Lesedi FM radio personality Ntsoaki Mpese Motloung. She runs a popular show Lenaka La Motheo. This graceful radio celebrity, not only is she incredible and amazing, she is a legend that walks in our midst in her own right. She studied electrical engineering but embraces seamlessly the cultural domain of South Africa; something that I have not seen before. In this way, she blends the esoteric and the artistic; a rare combination by all accounts. She is not just a radio figure but she also gets involved in the event itself. South Africa and the world need people like her with this kind of cultural fervour. She is highly motivated to step into the shoes of others in order to feel and reflect their state of being.

The Bakholokoe nation are led by Morena Lesia of QwaQwa and Morena Paulos Moloi of Tshiame. There are other leaders of the Bakholokoe in other regions of South Africa such as Lephatswana of Daggakraal, Lehlohonolo Moloi of Nquthu and numerous others.

The Bakholokoe settled around Lekwa in Mpumalanga in a place called Thaba Kholokoe which has since been rediscovered by the Lekgotla of Bakholokoe of the Free State Province under gutsy leadership of Morena Lesia and his members of Lekgotla. The rediscovery of Thaba Kholokoe is a historic event and a major milestone as this will serve to advance the frontiers of the knowledge of self and add completeness to the identity of the Bakholokoe people.