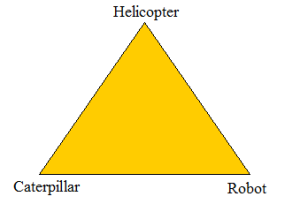 The Triangle model showing three analysis perspectives from the book The Sacred Knowledge of the Desert: African Philosophical Transcendence.

A colonial behaviour requires some serious justification. The colonial architects use organized religion to justify their plundering behaviour. This gives them a moral just cause. They also use English education as a civilizing tool to transform and mesmerize the minds of the colonized. This gives them another moral just cause. In the case of South Africa, the champion of this benign form of colonization was Sir George Grey. He had successfully subdued the warring Maori people of New Zealand using the bible and the English education. The British Empire was so impressed with what Grey had achieved in New Zealand that they pleaded with him and recommended that he be appointed to South Africa’s Cape Colony as a Governor in order for him to duplicate the Maori success in South Africa.

For the colonizers, the church is not just a holy place of worship for the captive audience but it is also a military base where they store weapons of war to carry out surprise attacks against the unsuspecting resisters of colonization. This was the case when a missionary spied on and tracked the regiments of General Mbilini Dlamini ka Mswati on behalf of the British colonial authorities. The missionary eventually got within a striking distance and he shot General Mbilini. Mbilini later died from his gunshot wounds. The missionary was never arrested because he had carried out the mission of death against the African resisters in accordance with the command of the British Colonial Administration. The soldiers of General Mbilini launched a massive manhunt for the missionary. He was eventually tracked down, abducted and taken out of commission.

The Mind of the Colonizer

How does the mind of the colonizer actually work? On the one hand, you profess the Christian faith, the spirit of forgiveness and encourage the African natives to adopt the new faith. On the other hand, you store weapons of war inside church buildings and even shoot unsuspecting natives of the land from inside the church? This cowardly fact is the best kept secret.

In order to reverse and get at the inner workings of the colonial mind, we need some cutting edge tools that will enable us to achieve this. The following is a list of tools that will prove productive in our task.

About the Reversing Tools

The above mentioned tools cover a wide gamut in terms of knowledge disciplines. They shall be discussed more deeply in another article. In this case it should suffice to say that these tools cover knowledge disciplines such as psychiatry, psycho-analysis, dialectical materialism, genetics, anthropology, physics, chemistry, modeling and numerical analysis. Drawing from these knowledge disciplines, it will be possible to present a clear understanding of the mind of the colonizer and its inner workings. This should assist the future generations to gain an instinctive grasp of why things are the way they are and how they can regain their ability to architect and direct their own destiny.

Thus, the brain is a black box to us just like a flight recorder in a plane. The Canadian company xwave for whom I worked as a Senior Software Engineer was formerly known as Software Kinetics and one of their functions was to decode flight recorders. Software Kinetics decoded the flight recorder of the Swissair Flight 111. The Swissair Flight 111 plane was from the US John F. Kennedy International Airport in New York en route to Geneva, Switzerland when it tragically crashed into the Atlantic Ocean of Nova Scotia, Canada in September 1998 where 229 passengers perished. Our company decoded the flight recorder and reported to the aviation authorities in terms of what really happened in that fateful flight.

By understanding the conniving mind of the colonizer, we are in a better position to understand the current MSRM relations. This is important for us because it gives us the timeline and the historicity of the mind of the colonizer. This knowledge is extremely vital because history is the final arbiter of knowledge. History answers the why questions. Why did the African lose the land? How is the African expected to move on when he does not understand the impact of colonization on his psyche? How can the African move on when the fundamental questions of colonization have not been addressed yet in a fundamental way? How can the African understand and embrace the future when he is still fixated in the past?

The purpose of reverse engineering is to outline the main subsystems that underlie the cryptic system of the colonizing mindset and use graph theory in advanced mathematics to show how the subsystems are interconnected in terms of network, cardinality, arrangement and morphological analysis.

In our case, we are going to use the triangle model as a powerful tool of analysis as outlined in the books The Sacred Knowledge of the Desert and The Philosophy of the Triangle by this author.

In the case of the brain architecture, we are interested in the three subsystems namely (1) reptilian brain, (2) mammalian brain and (3) cortical brain. Our mission in this analytical article is to investigate, establish and isolate the brain system that dominates the mind of the colonizer. We shall later use this analytical knowledge to analyze others like The Mind of the Imperialist.