August is women’s month in South Africa. This day has its roots in more than 20,000 women who marched to the Union Buildings of the then apartheid seat of government of Prime Minister Johannes Gerhardus Strijdom on August 9, 1956. The purpose of the march was to hand in a signed petition seeking the abolishment of the oppressive pass laws.

The Petition and Solidarity

The petition, signed by women of all races, was presented to the Prime Minister’s office but he was not there to receive the women. Women tell us that the Prime Minister got too scared of woman power that he decided to hide. It is not clear whether he hid under the table or some place else.

The attention-grabbing part of this march is that it was the Black mamas and the White mamas (along with others) who had united in a single purpose to advance the emancipation cause of the African women.

We need this kind of solidarity spirit in the 21st Century as we celebrate August as the women’s month. We must take a page from the past. Imagine an emancipation struggle where people of all races, culture or creed get together to expedite the emancipation of a particular oppressed group.

The New Year and Women

Another historical note about August is that it is the beginning of the New Year according to the Basotho calendar. The Basotho calendar begins in August (not January) and ends in July (not December). The current calendar of January-December is a colonial calendar based on European seasons. The Africans have their own indigenous calendar that celebrates in accordance with their seasons and cosmology.

One of the ceremonies that open the New Year of Phato in the Basotho calendar is Mokete wa Lewa meaning the ceremony of strategic reflection. This is an effective intellectual ceremony; a ceremony that is focused on the the discourse about strategy and pattern recognition. It is incredible that the Basotho dedicate a ceremony towards strategy as part of their cosmology in the ushering of the New Year. This underscores the important power of strategic thinking and transdisciplinary knowledge. This means the African natives must ceremonially transcend operational details of mundane life in order to reflect on the big picture and thus leverage a helicopter view of where they need to focus their vision as a people.

When I participated in the past celebrations of Selemo Sa Basotho (The New Year of Basotho) at Thokoza in the Gauteng province under the auspices of the Mara Community Organization, I was transported to another world. The traditional women and men with their ceremonial attire put together an unforgettable convivial sight with amazing dances, presentations and demonstrations of the actual seeds of what they would normally plant in their fields. This year’s big celebration is taking place on August 29 at Thokoza near Germiston. I encourage you to make plans to get there.

This ground-breaking month of August presents an opportunity for a new beginning whereby a renewal of commitment to build a more inclusive and equal society also celebrates the women of the land. It so happens that the Basotho are a matrilineal society whereby women like Rakgadi, Mmangwane and Nkgono are acknowledged as the moral and intellectual leaders of that society. Another important leader of that society is a male known as Malome. The noteworthy fact is that Malome enjoys a higher status because he comes from the maternal side.

Today we are far from making women feel like leaders of society. The patriarchal systems of organized religion, systemic neo-colonization and economic stranglehold have dealt a tragic blow to what was a matrilineal society. Today there are separatist tendencies among the emancipation activists. Hopefully, these writings should inspire us to strive towards the great struggle for the equal emancipation of all peoples of society.

This is the power of women. When they cohere as a united force, there is no state power that can stand in the way. This explains why modern state, corporate and institutional power uses subliminal techniques to subdue them because women are too strong and cannot be subdued directly.

Let’s learn from the past like the great legend of Sankofa. History pages record powerful women who stood up to imperialist armies like the supreme Queen Candace of Nubia who repulsed Alexander the Great when he attempted to overrun Nubia. This historical account is omitted from the Erocentric pages of history. As documented in the book The Sacred Knowledge of the Desert, Alexander the Great was forced to retreat. Africa boasts the longest history of female rulers and represents a historically and culturally rich place for any research on female rulers such as Makeda (Queen of Sheba), Nehanda and many others. 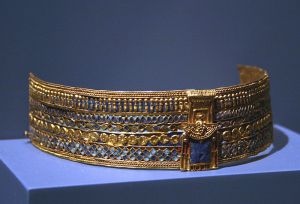 The royal artifact of Queen Candace of Nubia

When Augustus Caesar of the Roman Empire attempted to make Nubia into a province of Rome, his invasion was repulsed by another female military general Queen Candace Amanirenas. This historical account is confirmed by a Greek historian Strabo who adds that the Romans had never seen such a powerful woman who was capable of fighting and defeating the Roman army. Eventually, Rome was forced to agree to a treaty that satisfied the demands of the supreme Queen Candace Amanirenas. The Nubian soldiers even took the bust of Augustus Caesar and buried it in Nubia as a sign of their military prowess. This bust was to be later discovered by a British archaeologist Professor John Garstang in 1910 in the present day Sudan. 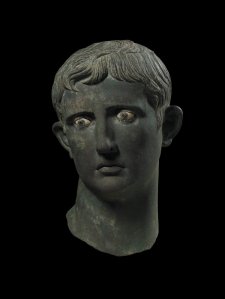 The bust of Augustius Caesar at British Museaum

The interesting fact about this Nubian Queen who defeated the armies of Rome is that Augustus Caesar was forced to pay tribute to the gods of Nubia something unheard of in the history of the Roman Empire and a case where Eurocentric historians are missing in action. The most eminent scholar Cheikh Anta Diop brings this account to us. The University of Senegal has since been renamed Cheikh Anta Diop University in honour of Dr. Cheikh Anta Diop; a well deserved honour. Fortunately for us, Greek historians like Strabo and the great legend Cheikh Anta Diop have recorded this important part of history for us. This goes to show the indefatigable power of the African female rulers as reported by those who have gone before us.

Here in South Africa, the colonial army was shocked to be confronted by a female military General Manthatisi in the Eastern Free State province in the 1800s. One of South Africa’s submarines which belongs to the Navy is named in honour of the indomitable Manthatisi.